A space to find my place

If you love a great epic fantasy then you are going to love this. I could not put it down. It is a gripping trilogy filled with explosive action, adventure & complex characters.

From the first page you are drawn into the world where for a thousand years the ash has fallen. A world where mists rule the night. A world ruled by the evil Lord Ruler.

New York Times Bestselling and David Gemmell Award-winning author Brandon Sanderson explains how he came up with the plot:

I came into this book with two big ideas for the plot. The first was that of a heist story, like Sneakers or Ocean’s Eleven involving a gang of gentlemen thieves who each had a distinctive magic power. I wanted to tell the story of how their different magics and abilities worked together for them to pull an incredible caper.

The second idea was to write a story about a world where the good guys lost. I wanted to take the standard fantasy story I’d read a dozen times, that of a young peasant hero who went on a quest to defeat a Dark Lord, and turn it on its head. What if the Dark Lord won? What if, in the final climactic moments, he killed the hero and took over the world

The Cinescape magazine said “Author of the critically acclaimed instant fantasy classic Elantris (2005), Brandon Sanderson returns with the first novel of his new Mistborn Series. After 1,000 years of oppression the memory of hope has all but faded in a mist-haunted, dust-ridden world where powerful Great Houses rule the serf-like Skaa with a cruel, bourgeois hand. In one of the Lord Ruler’s hellish prisons, however, Kelsier discovers he is one of the Mistborn, a select group of individuals with impressive, metallurgic powers. Together with a band of elite, cutthroat criminals Kel wrenches his way upwards to stage a coup of unprecedented proportions, but are his powers alone enough to topple the immortal dictator known as the “Sliver of Infinity”?

And Robin Hobb states “Mistborn utilizes a well thought out system of magic. It also has a great cast of believable characters, a plausible world, an intriguing political system, and despite being the first book of The Final Empire, a very satisfying ending. In short, it’s one of those great kettle books, in which the author has thrown not merely a bone of an idea and a few potatoes of originality, but half a cow and everything in the garden. And then added seasonings. Highly recommended to anyone hungry for a good read.”

Mistborn is a spectacular saga with wonderful characters who ask questions of hope, trust and loyalty.

A magical journey with an astonishing ending. A journey that I highly recommend embarking on. 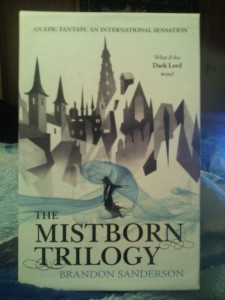 Whats it all about

A place to find my space. Whispers from my soul. The life story's that have accumulated to make me who I am today.

When you remove the walls and deconstruct the barriers. When you loosen the binding straps of conditioning. When you release yourself from expectation, your own or others. When you no longer are directed by perception. When all the hurt,suffering & pain, real or imaginary is removed. Then the essence of you can be true. Soul Stripping.
Follow Soul Stripping on WordPress.com
Pan-Tree

Online Dating is going to turn me into a Crazy Cat Lady.

What happened once I was out of a 12 year relationship?

Fashionably Late to Life... and more!!

Chronicles of a late bloomer attempting to critically analyze the world/my life, one crazy moment at a time.

Middle-aged dating in the digital world

The Secret Diary of a She-Wolf

Honest accounts of love and lust from an insatiable woman

The Good, the Bad and the Cringe-Worthy

Ever been on a really amazing date?

Social exploration and sensuous stories with a serious side.

The man behind the story

Good health begins in your gut. Change your life with the ph@tt gut healing program

your only limitation is you own imagination

The Task at Hand

A Writer's On-Going Search for Just the Right Words

Inspiration through my thoughts, experiences and travels

A space to find my place